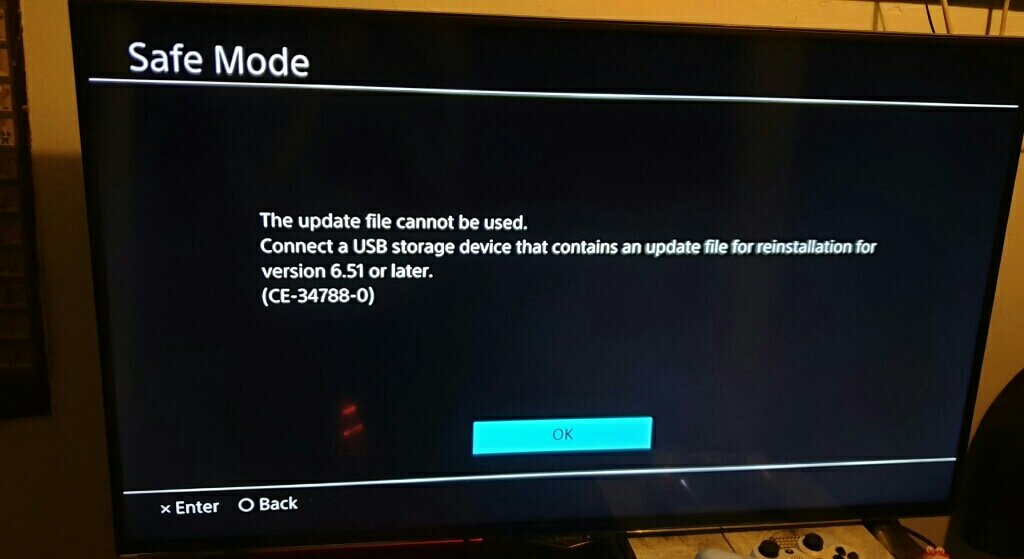 PS4 software update 7.00 is already available for download, but if you encounter the error code CE-34788-0 Aka this update file cannot be used, then here’s how to fix it.

Sony’s PlayStation 4 is a great console to begin with, but it has its own fair share of troubles. Today, I was battling it out on Fortnite with my PS4 connected to an uninterrupted power supply. The apparatus went off unexpectedly and when I turned it back on, I was greeted with an error message that left me totally dumbfounded. It reads thus;

Connect the DUALSHOCK 4 using the USB cable and then press the PS button.

Like seriously, I decided to play the nice guy by hooking my controller into the console and then went on ahead to press the PS button as described (hoping that it do fix the issue), but I was disappointed with the message that appeared on the Safe Mode screen.

Connect a USB storage device that contains an update file for reinstallation for version 7.00 or later

You can download the update file for reinstallation from playstation.com

I was already tensed, one more error and it’d be straight to Sony (I’d send my console for repair). Whilst nervous, I navigated to the recommended site and downloaded the update file for update. The size was 300mb or thereabout.

Also Read: How to Gameshare on PS4

With the download completed, I unplugged my USB stick from my computer and had it inserted safely into my console. I then click OK and waited patiently for a successful text but got this instead..

The update file cannot be used.

Connect a USB storage device that contains an update file for reinstallation for version 7.00 or later.

Damn! I was pissed…. but on a second thought, I decided to re-read the error message and that was when the word “reinstallation” rang bell. Initially, I didn’t take note of that. I was feeling anxious and instead of downloading the full “update file for reinstallation” which was about 1GB, I went and got the update file.

Upon realising my mistake, I made my way to the site and got the right firmware. This time, the installation was successful. So that was how I fixed the error. I’d hope this article help you.

Dude you saved me! This was truly helpful!

Your was not erased? i mean, this file can restart your console (or may i wrong)