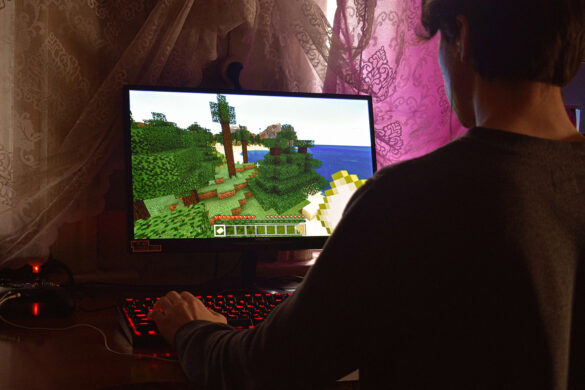 The world of gaming has evolved quite a lot, particularly after the introduction of the internet. In fact, internet gaming has become mainstream; nowadays, you can play most of the famous titles on the internet with the help of your gaming PCs or gaming consoles. The interesting thing to note here is you don’t even need to download them to play them; you just need a good internet connection with enough speed, but what exactly is good internet speed for PC gaming.

In this piece, we have tried answering the aforesaid question because, more often than not, people find themselves experiencing lags because of their internet connections; they try to run games that are not supposed to run on their respective connections. Before getting into that, let’s understand how internet speeds affect gaming.

You might know that a good internet speed is essential to run games but do you actually understand how it affects gaming.

The speed of the internet is generally measured in megabits per second, aka Mbps. As the name suggests, Mbps measures how many megabits can be transferred from source to destination in one second, which is also known as the bandwidth.

The more the Mbps, the quicker you can download and upload data from the internet. Most modern games require downloading and uploading vast amounts of data that too at rapid speeds. So, the faster the speeds, the better the gaming experience will be.

The minimum recommended internet for PC gaming is between 3MBPS to 6MBPS, but it all comes down to the type of game you are playing. For instance, in the case of a multiplayer, high-quality graphics game, you will need to upload your actions and download the actions of other players in real-time, so you will need a fast connection. However, if you are playing a card game, it can work pretty well on a relatively slower connection.

Overall, if you are a casual gamer, playing a game that requires a minimum response time of 3 to 6 MBPS is good for you, but if you want to play high-quality games, you will need at least 25MBPS.

How Much Speed Do You Need for Different Game Types?

You cannot generalize internet speeds for games; every game has its own bandwidth requirements. However, we categories modern games into different categories, including first Person shooting games, real-time strategy games, and more. And, it is possible to calculate the average bandwidth requirement for a particular category.

This section contains details about typical bandwidth requirements for some of the most popular types of games.

First-person shooting games require the most resources by far among various types of games. So, to run these types of games smoothly, their minimum requirements are:

Role-playing Games require the least amount of bandwidth among various gaming categories. So, it is possible to enjoy these types of games at low speeds connections:

These types of games have requirements similar to RPGs; as a result, even low-speed connections can easily handle them without any issue.

How To Test Your Internet Speed?

If you experience a lag while gaming or doing other stuff on the internet, the first thing you must do is run a speed check. After that, you will get to know where the problem lies.

You can use the Speedcheck tool to check your internet connection speed. Along with testing your internet speed, it will offer you complete insights about your connection.

Other things that affect your online gaming experience

There are other things that you have to consider, including low latency, low ping, and low packet loss. Moreover, bandwidth requirements increase as the number of persons connected to a network increases, mainly when they are also doing heavy-duty work on the internet. For instance, if four people are connected to the same network, three are gaming, and one is streaming movies at 1080p. Now, if they share a 3Mbps connection, it is unlikely they will experience a smooth, lag less connection.

Your internet connection speed affects almost anything when you are doing stuff online, whether you are streaming videos on YouTube or playing the game. Internet speed determines whether you play videos at 4k without streaming on YouTube. In the same way, it makes a huge difference when you are trying to save goals in Rocket league or marching towards Victory Royale in Fortnite.