Home » Space-Themed Games, Now and Then

Space-Themed Games, Now and Then 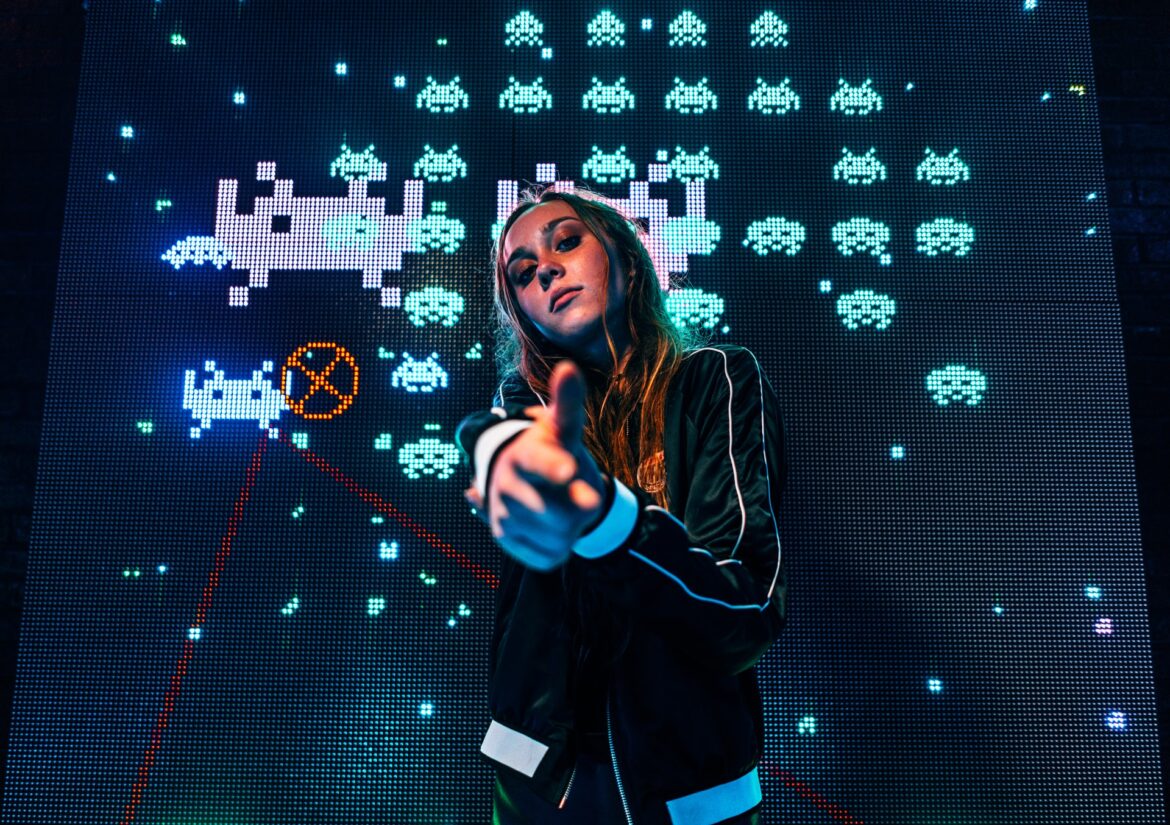 Video games have always gone hand in hand with futurism, science fiction, and technology, so it is a given that there have always been space-themed games on the market. From the simple arcade classics of yesteryear, right up to the most complex, cutting-edge titles on PC and console, we can’t get enough of off-world games. But which titles stand out among the many? Let’s take a look at some of the most popular, and the most iconic, out-of-this-world games.

Let’s start with one of the icons of gaming history. Space Invaders, released in 1978, wasn’t just a game – it was the game. It almost single-handedly ushered in the so-called Golden age of arcade video games and remains the second highest-grossing game of all time ($15.8 billion, just behind Pac-Man).

We all know the setup – the player moves a laser cannon horizontally across the bottom of the screen and fires at aliens overhead. The aliens begin as five rows of eleven that move left and right as a group, shifting downward each time they reach a screen edge. The player has to try to shoot all the aliens (who are also firing back, trying to hit you and destroy your protective bunkers). Simple, yet thrilling and high octane, Space Invaders was the first fixed shooter and paved the way for the more modern shoot‘em up genre.

Online casinos have really taken the world by storm in the last few years, with innovative games with cutting-edge graphics, themes, gameplay, and levels coming out all the time. JetX is a great example of the new ideas emerging from that area of the industry. A simple, arcade-style game that will get you hooked, JetX combines a fun, old-school aesthetic with betting, whimsical music, and neat graphics.

Players place a bet, then wait as a manned rocket rolls along a runway and soars into the sky. The aim of the game is to eject and parachute the pilot to safety before the rocket explodes (which happens at an unspecified point). The winnings increase as the rocket gains altitude, and you trigger the ejector seat by pressing ‘collect’. If the pilot doesn’t get out in time, the bet is lost. A fun way to gamble a little online, without the rules and regulations of other casino games.

There have been hundreds of Star Wars games over the years, from classics such as X-Wing, Rogue Squadron and Battlefronts, to more obscure gems such as An Empire Divided. There are fun, kitschy classics like Lego Star Wars, and literally thousands of fan-made games (the official ones are all licensed by Lucasfilm or LucasArts). But one of the latest in the long line of Galactic treats is Star Wars: Squadrons, the most full-on, immersive title in the entire canon.

Players take control of starfighters from either the Galactic Empire or the New Republic navy. In these ships, they can utilize the movement of power between the ship’s functions of weaponry, shields, and engines to defeat their opponents in combat. Players can choose from iconic ships from the Galaxy far, far away, such as X-Wings, A-Wings, TIE Fighters, and TIE Bombers. Squadrons support VR headsets and have both story mode and multiplayer.

A reboot of the original on the Super Nintendo, Star Fox 64 is a 3D rail shooter video game developed for the N64. It was the first game Nintendo made to incorporate their Rumble Pak, included in the box – this added vibration to the controller for firing or damage. Players control vehicles piloted by Fox McCloud, usually an Arwing. Most of the game takes place in “Corridor Mode”, which forces Fox’s vehicle down an on-rails path straight forward through the environment. The player maneuvers the craft past various obstacles and positions the vehicle to be able to fire at enemies while completing the level. Star Fox received critical acclaim upon release, and like its SNES predecessor, is regularly cited as one of the greatest games in video gaming history.

Another all-time classic from the arcades, Asteroids was released in 1979, just a year after Space Invaders. It has some similarities – players must shoot at incoming asteroids and flying saucers, while dodging them, and dealing with return fire from the saucers. As the game continues, the difficulty increases, with greater numbers of asteroids. Objects wrap around screen edges – for instance, an asteroid that drifts off the top edge of the screen reappears at the bottom and continues moving in the same direction. As the player shoots asteroids, they break into smaller asteroids that move faster and are more difficult to hit. Ruthlessly addictive, and like the best arcade games, its power lies in its simplicity.

These are just five of the galactic quantity of great space-themed games available out there. While the technology behind today’s games is developing rapidly, the old classics are still icons of the industry, and still immensely playable.