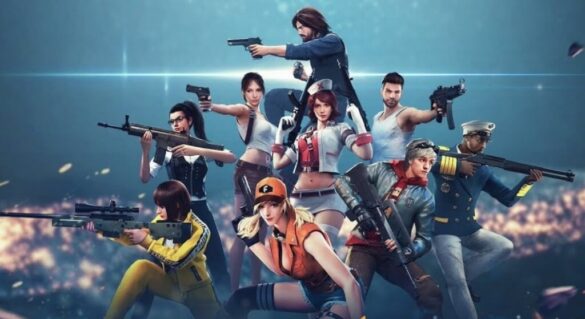 Free Fire painlessly took the spot as the most downloaded mobile game last year, and it is retaining the same position as the most played game in 2021. It is undoubtedly popular, beating the likes of PUBG and Fortnite by a margin and has cumulated hundreds of millions of dollars in revenue.

Slapped under the Battle Royale genre, Garena Free Fire concept is pretty simple. A total of 50 players are launched from a plane and parachutes onto an island with the goal to gather resources and build barricades for covers whilst avoiding oncoming storm and fighting other opponents to become the last man standing.

It’s pretty intense per se and the best part is that you can either play solo or join a 4-man squad. From Speed War to Bomb Squad, Free Fire brings 9 different game modes as well as a plethora of weapons that can be picked up whilst navigating round the map.

Now assuming you are looking to improve your rudimentary skills or to get unlimited diamonds that can be used for upgrades or to purchase rare items in-game, then here’s the best Free Fire Mod Menu to utilize right now.

Often referred to as the Swiss Army Knife of mobile game modding, Free Fire mod menu is literally a modified version of the vanilla game that includes an extra add-on or floating in-game menu with options to toggle various hacks or cheats on and off.

Modded by our dear Sami Gaming, this highly acclaimed Free Fire mod menu comes fully-loaded and the best part is that it works and most importantly, free-to-download. Below is all the features it has built-in.

Mod Menu is arguably the new normal, especially in mobile game modding. They come with a dozen of hacks that can absolutely simplify gameplays without sweating a lot. From Aimbot to unlimited diamonds, here’s all the features and/or hacks/cheats integrated in Sami Gaming’s Free Fire Mod Menu.

As you can see, Sami Gaming Free Fire mod menu offers the best and perhaps the most complete features out there. From the option to enable ESP, players can easily perform auto headshot and even set the number of coins and gems to unlimited. The latter doesn’t work when trying to purchase items, but you can as well use it to showoff.

The steps involve in sideloading Sami Gaming Free Fire Mod Menu is pretty simple and straightforward. So if you’re already itching to use hacks for every single match, then here’s how to install Free Fire Mod Menu on your Android phone.

Will I Get Banned for Using Free Fire Mod Menu?

While the game’s developers have shown zero tolerance to cheaters by reportedly banning over 1 million accounts of those caught using hacks to gain unfair advantage over others, you need not worry as this free fire mod menu comes with a fully-fledged and working anti-ban feature.

However in other to stay safe, we recommend using this mod menu on an alternate account. Do not use it on your main account in other not to get banned.

The best things in life are free and that too applies to Garena Free Fire mod menu. For one thing, there are literally a slew of mod menus developed specifically for the game, but Sami Gaming’s work outshines most of them in all ramifications. So go ahead and shoot those enemies to kingdom come for this is arguably the best and only working Free Fire mod menu worth utilizing right now.