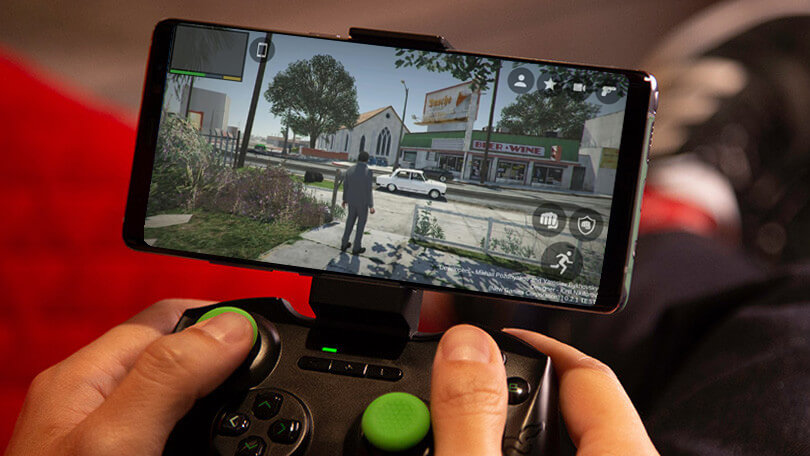 Once upon a time, a boy whose parents never allowed to own a console decided to stick to mobile gaming. He initially kicked off with all of Gameloft’s AAA titles such as Backstab, 9mm HD etc and later got tired. The thirst for an open world adventure game engulfed him, and that was when he was introduced to the grand theft series.

With zeal, he played liberty city to finish, then dusted vice city and later settled with San Andreas after months of gameplay. Now he longs for more, perhaps to see either the GTA IV or GTA 5 on mobile, but smartphones internals aren’t getting that robust.

His hopes were fading, and he was already thinking of a way to play those franchise. Of course buying a console would put him in a very difficult situation, so he decided to go for a dedicated gaming PC. Just when he was about to order one, something spawned.

A news he never envisioned popped up on his mobile, and there it was, “an original GTA V for Android.” At first, he bluffed it, but the gameplay screenshots looked so real that he decided to give it a try and boom he did, thus realising that the whole gad damn thing wasn’t a lie afterall.

Trying Out the Original GTA V on Android

With love, two independent developers by the name Mikhail Pozdnyakov and Yaroslav Bykhovsky took it upon themselves to release a test version of unity based port of GTA V on Android and albeit buggy, they’re highly playable.

A short video of GTA V playing on an Android phone was first teased by Ben Geskin on his twitter handle, and from the look of things, he wasn’t streaming the game as the controls were fully functional.

To further clear the doubt, he posted a link for users to join his telegram channel where they can download the APK of the game and the size is just a little over 400mb.

Since the ported GTA V isn’t available on iOS, I decided to give it a try on my Galaxy S10 plus. The gameplay was unsurprisingly buggy. The map disappears just after going a few kilometres into the game, and the surroundings glitches out sometimes.

Of course you can hijack and drive luxury cars, beat up pedestrians and engage in shootouts with gang members, but this activities lags like hell. Turning off my internet connection while using ultra graphics setup helped improve the gameplay a little.

For now, instead of treating the game harshly and dropping bad reviews and comments, I’d opine you consider it a novelty that will undergo serious improvement. It’s playable though and this also suggests that there’s probably a GTA V coming to mobile in the future.

So Will There Be a GTA V on Mobile?

As you’d know, GTA V biggest drawback is its space requirement. Clocking in at around 65GB, it’s literally a huge and graphical demanding game. Due to this, a lot of folks thinks that there won’t be a GTA V on mobile. This may be true in one way, but when you look at how mobile specs are improving, then you’ll have a second thought.

We have reached an era where smartphones are launching with bigger display, backed with up to 12GB of RAM and 1 terabyte of inbuilt storage. Now, if Bully and the like of San Andreas can painlessly run on a 1 GB RAM phone with lower processor, then why won’t GTA V?

I consider myself as a hardcore gamer, and I have hope for the best. Suggestively, a solid hand-optimisation of GTA 5 codes with hard compression can literally reduce the game size from 65GB to 25GB. To achieve this, I’d think that Rockstar should go the way of Fifa 16 by making the game online and allowing users to download certain data files.

Extra audio files such as radio stations, etc can be downloaded optionally, and they can even urge players to pay some fees to unlock weapons and various vehicles on the game. The storyline should be retained, while improving the shaders and graphics engine just like what they did with San Andreas.

Thinking negatively, games like bully anniversary was indeed a ‘port’ done right albeit not selling well. And well you think of how games like Vice City Stories, Max Payne 2, Red Dead Revolver, The Warriors, Manhunt, Midnight Club and GTA IV have completed there 10th anniversary without a remaster for mobile devices, then you’d think that the company are giving mobile gaming a break. But let’s hope for the best.